Preparing for the Future: Path to College 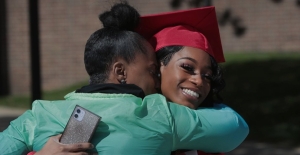 We are very excited about this college-access mentoring program, which economists at the University of California Davis and Dartmouth College (Carrell & Sacerdote, 2016) created and generously shared with the Center. This program was developed with an eye toward improving college attendance. “We started with the premise that many academically capable high school seniors do not apply to college because they are intimidated by the process, lack parental support, or are stymied by their own tendency to procrastinate…Our intervention attempted to mitigate all three of those problems through an intensive mentoring program.”

To accomplish this, Carrell and Sacerdote partnered with the New Hampshire Department of Education and high schools throughout the state, instructing guidance departments to identify seniors who had expressed interest in college but, four months into their senior year, had not yet filed college applications. They then randomly assigned half of the high school seniors to receive help from college students who coached the high school student through the application process while the other half received all the same information but no mentor.  The mentoring relationship was essential to the program’s effectiveness. Compared to a randomly assigned “lighter touch” group, those with mentors were nearly twice as likely to attend a four-year college (Carrell & Sacerdote, 2016). Moreover, the positive effects were most pronounced among students who were not relying on parental or teacher support for processing college applications and who were less extraverted. Thus, this mentoring program, which Professor Sacerdote has generously shared with the Center,  can serve as a substitute for skilled help from a parent during the college application process.

Preparing for the Future: Path to Employment